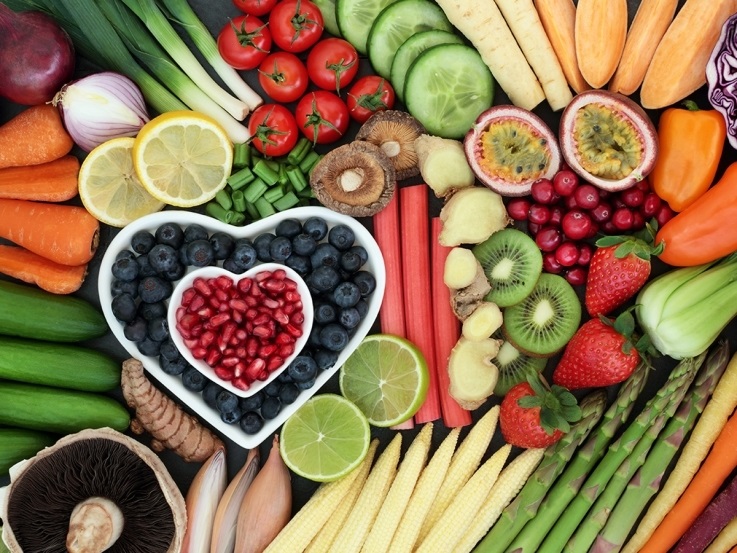 Though humans have evolved to eat a wide variety of foods, plants may be our best bet when trying to eat for good health. Avoiding excessive amounts of animal proteins, dairy and other foods derived from animals have been consistently shown to offer health benefits. Adopting a plant-based diet, or a vegan diet in particular, are two ways you might be able to make health gains over a standard American diet that features a lot more meat.

Eating a plant-based diet means that you're using plants for fuel, typically as close to their original source as possible. Think whole foods and lots of veggies. Plant-based diets have gained many followers and a lot of support from doctors and dietitians over the years as a very healthy way of eating.

But not everyone agrees on the exact definition of what a plant-based diet is. While some say it can include a little bit of food that comes from animal sources, Dianne Wenz, the New Jersey-based author of "The Truly Healthy Vegan Cookbook" and a certified holistic health coach, vegan lifestyle coach and plant-based chef, says that to truly be plant-based, a diet must be "free of any animal products, including meat, eggs and dairy. 'Plant-based' usually refers to an animal-free diet, without the lifestyle part."

Daryl Gioffre, celebrity nutritionist and author of "Get Off Your Acid: 7 Steps in 7 Days to Lose Weight, Fight Inflammation, and Reclaim Your Health and Energy," says that there's a bit more flexibility to the definition of "plant-based" in his interpretation. Though he follows a plant-based diet and follows a vegan diet most of the time, he says he also eats fish. "Some people on plant-based diets consume animal protein, and the plant-based diet gives you that leniency." He says the idea is that anything can be on the diet, in moderation, but that it prioritizes plant-based foods – fruits, vegetables, legumes and other non-animal food sources.

The vegan diet is naturally plant-based, too, given that it excludes all foods derived from animals. But it goes a step further, says Julie Barrette, a dietitian at Mission Hospital in Mission Viejo, California. "Vegans distinguish themselves by avoiding even gelatin products, honey and abstaining from clothing made out of fur, wool and leather as well as toiletries and beauty products that contain animal substances and are tested on animals." Feathers and silk are also on the prohibited list for vegans because they are derived from animals.

This is the lifestyle part Wenz mentions above, and for many vegans, this is an important moral distinction between them and people who do occasionally eat meat or otherwise follow a plant-based diet but aren't strictly vegan. Many vegans opt to avoid using any animal products because they are opposed to subjugating animals in any way.

On the flip side, "packaged or processed foods are very limited in a plant-based diet because the foods consumed are in as natural a state as possible, retaining all or most of their nutritional properties," Wood says. "A plant-based diet is centered around all fruits and vegetables, whole grains such as brown rice and rolled oats, abundant beans and other plant-based protein sources like tofu, and raw and unsalted nuts and seeds. Both would be considered vegan, but you can take all of these whole, plant-based foods and create beautiful, nourishing dishes that would be miles healthier than a vegan diet filled with junk food."

"Since plant foods are loaded with nutrients, they can reduce inflammation in the body," Wenz says, and "there have been countless studies that show the benefits of following a diet that's free from animal products can reduce the risk of developing chronic diseases, such as heart disease, certain cancers, type 2 diabetes, liver disease and kidney disease.”

Wood says that a diet centered around whole, unprocessed foods offers "abundant fiber, vitamins and minerals and protein, as long as calorie intake is adequate. With a well-balanced, varied, colorful plant-based or vegan diet you can improve your overall health, achieve and maintain a healthy weight, and lower your risk for diabetes, heart disease and some cancers."

In addition, she says that many people who switch from a standard American diet that contains a lot of meat, dairy and processed foods will feel quite different when they begin following a plant-based approach. "People who switch to a primarily plant-based diet experience increased energy, improved sleep and mood and overall better health."

Wenz says it's very difficult to actually become deficient in calcium or protein, but that B12 deficiencies can occur "because it's a vitamin that's not found in the plant world. It's important to supplement with it, because a B12 deficiency can lead to pernicious anemia."

The key is to plan what you eat to avoid deficiencies. Without this careful planning, "increased health risks or exacerbation of medical conditions associated with deficient intakes of these nutrients may occur," Barrette says. Specifically, infants or children on a vegan diet could have poor growth and development, and in adults, neurological disorders could be developing in otherwise healthy people, she says.

Wenz also notes that it's not always easy to follow a vegan or plant-based diet. "Eating meat-free can sometimes cause social problems, especially when it comes to eating out. A lot of restaurants are coming around to the fact that more and more people are eschewing meat, though, so there has been an increase in plant-based offerings on menus. It can also cause problems with family and friends who aren't on board with this way of eating when it comes to social gatherings and holidays."

Which One Is Better?

According to U.S. News' 2020 Best Diets rankings, the vegan diet ranked 17th overall and ninth out of 12 diets analyzed in the plant-based diet category. The Mediterranean diet, a plant-based approach that includes fish and some lean meat, was the top pick in that category and the top choice overall. Its focus on whole foods makes it a top choice year after year.

Because most dietitians and doctors espouse the idea of moderation and flexibility, adopting a plant-based diet may be the better option to going fully vegan, which can be a restrictive means of eating. "Generally, a plant-based diet is thought of as healthier, because those who follow it usually do so for health reasons," Wenz says. This means "they avoid processed foods. People on a vegan diet sometimes eat things like meat-free meats and dairy-free cheeses, which aren't the healthiest of foods. But a vegan diet can be just as healthy as a plant-based one, depending on what types of foods the person decided to consume."

Barrette notes that finding the right diet for you is an individual quest. "A registered dietitian's job is to recommend a diet for a patient only after considering a patient's sex, age, health history, medications, weight, etc., and individualizing a diet with that patient in mind. This means that a diet recommended to a patient may be different from that recommended to the general population." However, she continues, "from a public health perspective, many health organizations recommend moving toward more of a plant-based diet."

For her part, Wenz says that both can be an option, too. "I usually recommend a combination of both. A lot of my clients come to me because they want to go vegan, and they want to make sure they're doing it in a healthful way. I recommend they consume lots of fresh vegetables, fruits, whole grains and beans, with the occasional treat of a veggie burger or dairy-free cupcake."

Before you change your diet, Wood recommends getting some help. "It's important to get set up with a registered dietitian initially to be sure that you are on track with all of your nutritional needs. There are some people who would need certain restrictions, for example those with renal disease, so it would be good to check in with your doctor and a dietitian first."

Once you've cleared that hurdle, ramp up slowly rather than changing everything all at once, Wood says. "I suggest starting with 75% plant-based and working up to at least 90% for optimal health. Usually, when a patient gets above 90% for a period of time, the results are convincing enough to go all the way to 100%."