The year 2017 was a banner year in the financial markets.  Major indexes in the U.S. hit a number of record highs, and there was not a single down month the entire year for the S&P 500 Total Return Index.  The gains, however, have caused equity valuations to be stretched by almost all traditional metrics.  By most measures, the US equity market is at its most overbought level in over 20 years.  Duncan Lamont, head of research and analytics at Schroders Investment Management, writes that there is still some value in the market, “but it is hard work finding it.”  In the following chart from Schroders, Dividend Yield is the only metric where the S&P 500 might be attractively valued compared to its 15-year average value (shown in parentheses).  However, the reading of most concern is the CAPE, or cyclically-adjusted price-to-earnings multiple.  The CAPE compares the S&P to its average, annual inflation-adjusted earnings over the previous 10 years.  The current CAPE reading of 31 is above the 15-year average of 25, and nearly twice the long-term average of 16.8 that goes back to 1881.  The only other times it has been above 30 were in 1929, before the Great Depression, and from 1997-2002, at the apex of the dot.com bubble.  Some analysts say “It’s different this time”, citing rising profits from the new tax laws and differing accounting standards now vs then.  Nonetheless, whenever one hears “It’s different this time” usually turns out to be a good time to look around the room for a door marked “Exit”!  In this chart, Cape = CAPE, P/E = price to earnings, P/B = price to book value, DY = dividend yield and EM = Emerging Markets. 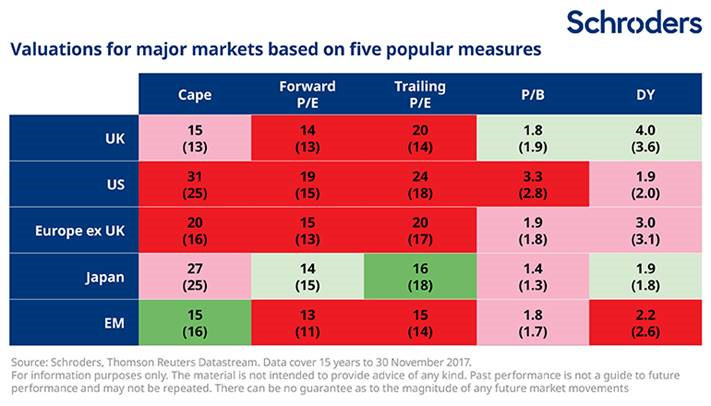